The Legacy of Our Ancestors

“Like silt deposited on the cogs of a finely tuned machine after the seawater of a tsunami recedes, our experiences, and those of our forebears, are never gone, even if they have been forgotten. They become a part of us, a molecular residue holding fast to our genetic scaffolding. The DNA remains the same, but psychological and behavioral tendencies are inherited. You might have inherited not just your grandmother’s knobby knees, but also her predisposition toward depression caused by the neglect she suffered as a newborn.”[1] 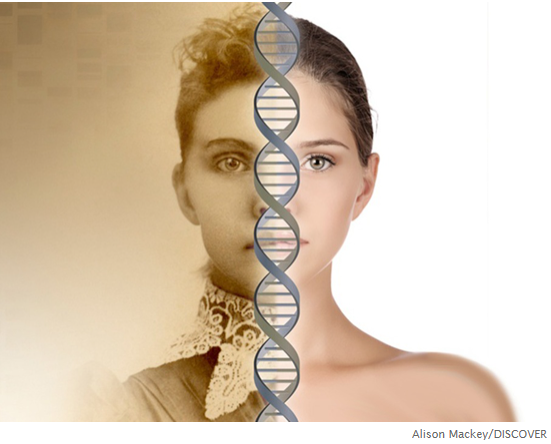 Epigenetics research shows that we inherit more than just physical traits from our ancestors. In fact, resonances from positive or negative experiences our ancestors have in their lives are passed down from generation to generation through epigenetic tags, affecting our thoughts, behaviors, and more.

Spiritual teacher Thomas Hübl likens this to a tree that encounters a line of barbed wire and absorbs it, trapping the wire within the trunk rather than growing around it.[2]

If we don’t heal the memories and emotions we have from our struggles and traumas, they will be passed down to successive generations. He says, “The painful experiences of our past become frozen in our bodies as stuck energy, trapped within the unconscious,” and this energy is passed from mother and/or father to a child, and so on.

In her research of children of Holocaust survivors, Amy Bombay (an assistant professor of psychiatry at Dalhousie University in Halifax) found that, in addition to psychological and social pathways, epigenetics do transmit trauma between generations.[3]  “We know now that the experiences and environment can turn on or off genes, so the function of those genes are changed…they have the potential to be transmitted across generations.” In fact, emotional trauma can span many generations, tracing through a family line, sometimes even to its very inception.

There is evidence too that epigenetics affect more than just behavior. The effects of chemical or toxin exposure, poor diets, and more are now being traced through generations to impact health and the development of illnesses such as cancer. In one study, biologist Michael Skinner exposed pregnant lab rats to a fungicide and traced abnormally low sperm counts through three generations, not because of a change in their inherited DNA sequence but rather epigenetics. To confirm this astounding finding he conducted further studies, exposing rats to other chemicals and tracing the subsequent diseases they caused through each generation. Again and again, diseases showed up in fourth- and fifth-generation offspring of mothers exposed to a chemical.[4]   Skinner says, “What your great-grandmother was exposed to could cause disease in you and your grandchildren.”

So, does this mean we’re doomed to be at the mercy of the trauma and illnesses our ancestors experienced? Not at all.

While epigenetics do pass along negative experiences or the predisposition for physical ailments, the positive is carried forward as well. For example, if your great-grandfather was adopted by a nurturing family you will likely inherit the benefit of the love and support he received in his childhood and the positive impact of it upon his life.

There are also ways to lessen or remove the impact of ancestral inheritances. One way is energy clearing, which releases energetic ties and brings balance back to the entire ancestral lineage, including children to come. This can affect not only behavioral inheritances, but physical ailments as well.

Another way is to focus on healing the “mother wound,” which Dr. Oscar Serralach describes as a wound, burden, or responsibility passed down from one generation of women to the next. If you know a little bit about your family history, you can probably identify patterns of behavior or attitudes that share commonality between generations. To heal these wounds we have to connect with ourselves and consciously identify where we might default into a behavior or when we’re being influenced by something that wasn’t ours. Sometimes, just being aware of an inherited behavior is enough.

It’s also important to think of what we are passing directly on to our children. Serralach stresses that we need be conscious of the self-talk we pass along to our children and find ways to support them as they develop and understand their power and potential, in essence paying it forward.[5]

[2] The Pocket Project – Facilitating the Integration of Collective Trauma

[3] Lasting Effects of Trauma Reaches Across Generations Through DNA